We use cookies to give you a better service. Continue browsing if you're happy with this, or find out more about cookies.
/ Blog / Killing Weeds

Weeds don’t just look ugly and steal nutrition from your garden, they can also erode concrete, tarmac and brickwork, leading to expensive home repairs. Once they get a hold, they can be very hard to get rid of so your strategy should be to stop them early.
That means whenever they appear, particulalrly during spring and summer, it becomes ideal weed hunting season. If you clear them when they make their first appearance, you’ll have far less work to do later.

Unfortunately, killing weeds is easier said than done. Plucking out tiny shoots of clover, buttercup and couch grass can be back-breaking and so too can tackling larger ones such as brambles, dock leaves and sycamore. What’s more, if you don’t get them at the right time, root and all, they soon grow back. Chemicals can also fail to reach the roots and pose toxic risks to pets, wildlife and other plants.

Killing garden weeds effectively depends on identifying them. Different plants have different survival strategies and weeds are no different. Some send down deep roots that quickly regenerate leaves and stems. Others depend on lateral runners, which are often hidden beneath the surface, and a third type race to produce voluminous seeds. Some depend on a combination of two or all three reproductive strategies.

Broadly speaking, gardeners can think of the deep-rooted type as perennials and the seeders as annuals. From a botanical viewpoint, the finer details are fascinating. For example, while some seeders can instigate another crop within a single year, others lay dormant for years. The latter often wait for an unwary gardener to dig over the soil before blooming in abundance. The poppy is a well-known example.

If you have a dormant seeder problem, tilling can be the worst solution you could choose. Although not a problem in Britain, seeds of the Egyptian lotus and the arctic campion can wait for thousands of years. Others are stimulated into life by high temperatures so even building a bonfire on top isn’t a guaranteed solution.

The best strategy for killing garden weeds, therefore, depends on what weeds are a problem. Once you have identified them, you can find out other useful pieces of information such as when they are likely to seed or how deep their roots are likely to be.

The humble garden hoe used to be in every gardener's tool shed next to the fork, rake and spade. Sadly, we seem to have forgotten what to do with it. In fact, there used to be a vast array of different kinds of hoe. However, almost any hoe will make light work of scraping lightly rooted weeds from the surface of reasonably firm soil, or slicing them from the crevices between paving slabs. And you don’t have to bend down to do it.

The hoe is less helpful when the soil is soft, the flower beds already crowded or the weed roots deeply embedded. It is also of little use if those weeds are ready to seed; you will simply help scatter them.

For killing weeds with deep columnar roots - such as docks - there are special tools with two long prongs. Dock roots can be two or more feet long so the prongs are a similar length. The tool levers at ground level in order to loosen and extract the root. There are smaller one-hand versions for shorter rooted plants.

Even if you can find one of those tools today - they are nowhere to be seen in most garden centres - the roots still often regrow if they snap on the way up.

Docks aren’t the worst invaders of this deep-rooted type that you might come up against. Sycamore can grow with astonishing speed both up and down. Once it is just a few feet high, you have a problem you won’t easily cure with a spade or fork of any kind.

Killing weeds with a weed burner 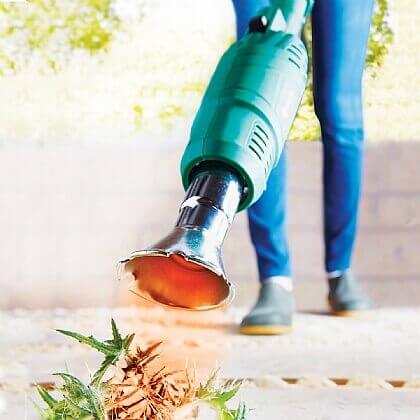 Although there are fire loving plants, very few can survive the 600°C generated by a weed burner. Electric powered tools are available that simply blow hot air heated by an electric element (much like a heat gun or paint stripper), so there are no toxic or inflammable gases and no pollution.

Weed burners are designed with a directional end-cone, so they allow you to pick out the specific plants you need to destroy without the heat causing collateral damage to everything nearby as well. Of course, another huge advantage is that you don’t have to bend down to weed; you can pick out your targets carefully while strolling leisurely through the garden.

While lopping off the head of a weed often fails to kill it, burning it has a different effect. If the roots aren’t entirely destroyed by the heat itself, they are usually prevented from regenerating after partial burning.

Weed burners are inexpensive and can be effective on both annual seeders and many deep-rooted perennials. They are particularly useful for killing garden weeds on your hard surfaces such as driveways and garden paths

Weed burners have two main limitations; most require access to a power socket and there is a limit to the size of the plants they can destroy. Woody plants can be too thick and deep roots may simply be too deep. 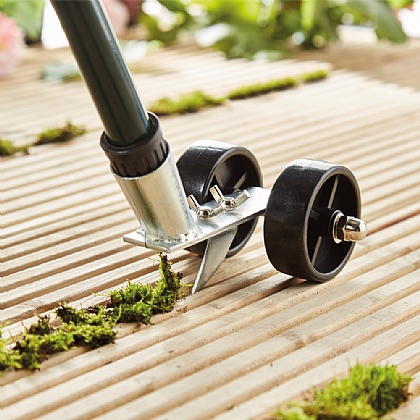 These tools have a downward pointing blade between two guide wheels and are ideal for killing weeds that grow in narrow crevices such as paving and slatted decking. They are also good at removing moss.

One enormous advantage they have over even the trusty hoe is that they are less likely to gouge or damage timber decking or other costly garden furnishings. The guide wheels allow you to plough straight lines with ease and some come with a choice of interchangeable blades in different sizes

They are also child and pet safe and like other manual methods, generate no pollution nor risk any kind of chemical contamination of your garden. 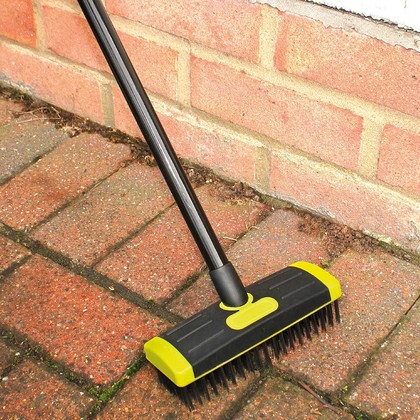 An ordinary broom isn’t a lot of help when it comes to weeding except for sweeping up afterwards. However, when you make the bristles from steel and design them expressly for that purpose, you’d be surprised what you can achieve with them. Wire brush heads are a great way of making mincemeat of most weeds and will brush away other undesirable debris at the same time. You even use them to remove weeds that plant themselves in loose overhead mortar.

Again, patio brushes usually come as kits with a variety of changeable heads. We recommend those with telescopic handles, not only because they can be adjusted for people of different heights but because they allow you to reach brickwork that would otherwise be out of reach.

These tools are lightweight so they save your back when working low and eliminate the need for climbing steps if you need to work high.

The ideal way to repress lawn weeds is by aeration. Many gardeners who take a pride in their lawns swear by aeration and mowers are sometimes equipped with spiked rollers to accomplish it. You can also achieve lawn aeration with an inexpensive hand tool. 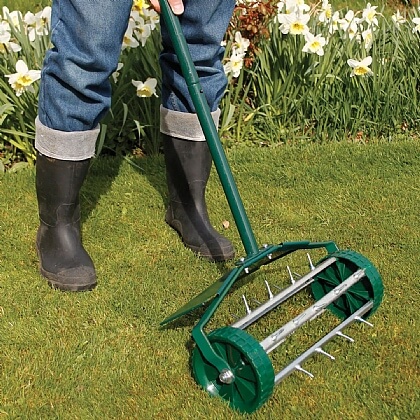 Aeration helps the air, moisture and nutrients to move through the lawn and keep the grass as healthy as possible. A useful side-effect is that it helps to prevent weeds, mainly because healthier grass is better able to out-compete them. The spike holes are particularly effective at preventing moss infections, because they help to prevent the water-logging that mosses prefer. 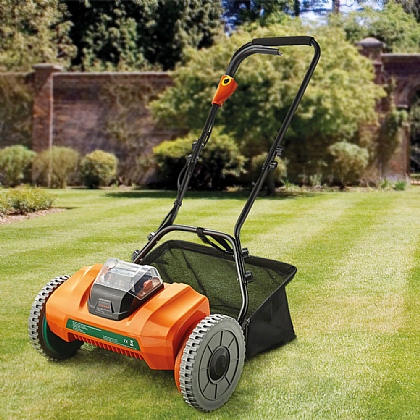 One of the remarkable things about grass is that it loves to be mowed. Most other plants don’t. Therefore mowing your lawn is a very effective way of killing garden weeds that spread into your grassed areas. By mowing regularly, you will prevent invasive annuals from ever reaching their seeding stage. It is also often effective against deep-rooted perennials because eventually most of them will become exhausted and give up.

Remember, however, that over-mowing can undo all your good work. Grass that is too short will suffer badly in hot weather and may even begin to die off. That creates opportunities for invasive plants, especially those with deeper roots. Mown grass should still be between 2 and 2.5” high - but it depends on the weather, your watering regimen, and the variety of grass you are cultivating.

The type of mower you use also makes a difference. Rotary mowers aren’t as kind to your lawn as the traditional type with cylinder blades. If you care about the health and appearance of your lawns, always invest in a good quality mower.

If you need to resort to chemicals, always choose a pet safe weed killer. Weed killing chemicals that aren’t pet safe may not be safe for other wildlife, or for people, either. In particular, be very careful to read the warnings before applying a weed killer anywhere near a fish pond. Fish are extremely sensitive to toxic chemicals. So, of course, are insects such as bees and butterflies; they are in enough trouble already.

When choosing a brand, we suggest you take the word “organic” with a pinch of salt. Organic is good for plants when you’re trying to grow them but not so relevant when you’re trying to kill them. Biodegradable is a more important word to look for; it means the weed killer won’t persist in the environment.

Most weed killers are effective on plants with green foliage but not always on those with deep roots or woody stems. There are specialised weed killers designed for these tougher plants, but they may be less safe so take care with them.

An alternative way of handling deep or woody plants is to dig down to the root and apply a plant poison around the stem well below the surface level of the soil. Copper sulphate is a common choice for tree shoots. It is not a pet safe weed killer; nor is it safe for humans or other garden plants. However, when buried 18” or below the surface, it poses little danger to anything else.

Many people who are suspicious of the chemicals used in commercial weed killers resort to other household chemicals. Some of the things gardeners recommend aren’t safer at all. Others are only effective on certain plants in certain weather conditions. Here are a few we have heard about.

Bleach will certainly kill plants, but it is hardly a pet safe weed killer and won’t do nearby plants much good either. In wet weather, it will easily spread through the soil to affect the roots of other nearby plants and in hot weather it can dry out and be blown by the wind. Even after bleach chemically neutralises itself, very few plants like to encounter the chlorine salts it leaves behind in the soil.

The same goes for household salt. Although many people sprinkle it around to deter slugs, it is not plant-friendly.

Vinegar, baking soda, and borax are only slightly less harmful. For example, although borax is sold in health shops and used to preserve caviar, it is toxic to many insects and can cause liver cancer. Vinegar and baking soda are safer but the former will turn your soil acidic and the latter alkaline.

We have also heard of WD-40 being used on prickly weeds such as thistles. WD-40 is quite definitely toxic but not only to thistles. It is far less environmentally friendly than proprietary weed killers.

Finally, there is vodka. Spraying vodka onto leaves when the sun is shining makes plants susceptible to dehydration. It is environmentally healthy and many gardeners choose to keep a bottle in the garden shed. Whether all of it makes it onto plant leaves is another question entirely.